the garden of forking paths

The Garden of Forking Paths brings together the work of ?ve artist-duos to consider duality, simultaneity, saturation and proliferation. The exhibition pursues, on the one hand, the implications of two individuals working together as a single author-function and, on the other, operates alongside artwork concerned with the reproducibility of images . In part a hermeneutical maze – itself curated and hosted by duos (Latitudes and MAISTERRAVALBUENA, respectively) The Garden of Forking Paths highlights a condition where decisions and imagery are at least twice mediated.

The exhibition takes its title from the 1941 short story by Jorge Luis Borges which centres on an apparently unfathomable novel and a mysterious labyrinth which are revealed to be one and the same. Written as if a statement by a double agent, this dense mystery tale proposes reality as a profusion of divergent alternatives and dimensions, a saturation of all possible outcomes.


The duos of the exhibition are each composed of different personal and professional dynamics – the artists are variously exclusive collaborators, related by birth, occasional accomplices, couples in life, and so on. Distinct from both generalised collaborative practice and the notion of the singular artistic genius, the duos’ model of creative production implies a constant state of questioning and a mistrust of consistency that is nevertheless a formalised partnership. Comprising works using editorial, photographic, sculptural, procedural, collage and appropriation techniques, The Garden of Forking Paths is concerned with such conditions in the context of the synthesis, modulation and reuse of images over time.

A selection of huber.huber’s monochromatic series ‘dark grounds’ (2007-8) repurposes photographic print media through cutting, cropping and collage. The juxtaposition of, for example, photojournalism or wildlife studies replicates the dislocation so crucial to Surrealism and offers a portentous and uncertain wilderness. Insects, minerals, fungi, desolate landscapes and other untethered signifiers similarly appear in seven collages from the companion series ‘Mikrouniversum und andere kleine Systeme IV’ (Micro universe and other small systems IV) (2009) which will be shown in sequence through the successive weeks of the exhibition. 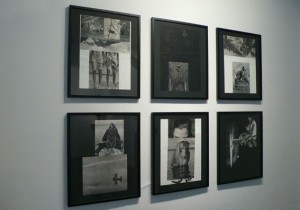